I've been spending time in my workshop opening boxes and putting away tools and supplies.  In 2010 I made wall mounted bins for my nails, screws, knobs and parts.  I wrote a blog post for a woodworking site where I post occasionally which explains the making of the bins.  Here is that post copied from there, sorry about the small font size, I could not get it to enlarge.

I found a plan in a magazine full of shop storage and tool cabinets published by Woodsmith/Shop Notes and so I decided to make my own bins.
Unfortunately I felt like one of Santa’s elves with the assembly line of parts. It seemed to take forever to make all the bins!
The plan called for sides of the bins to be made out of hardboard. At the lumber store I saw some that was pre-finished one side with white (melamine?) covering that was only a few cents more than the plain stuff.  I went with that because I figured the outsides of the bins could be white and look nice against my white walls of the (old) shop.
I would make as many bins as I could using the hardboard for the sides which were 7 3/4” for the large bins and 3 3/4” for the smaller ones. I found I could get 19 small bins and 12 large ones out of my hardboard piece.
The side pieces came from strips of hardboard ripped the length of the bins. Then I used my mitre saw to angle the pieces.

For some reason I thought I was getting two mirror images for each side of one bin, but I really was getting two of the same piece. This would not matter if I had not bought the one-side finished hardboard. But, by the time I realized that I wasn’t getting a left and a right, I had cut half of them.  So I ended up with some of the larger bins sides with the inside finished white. Not the original plan! After removing my palm from my forehead I figured I would have to paint the outsides of the ones I had cut wrong. Crap.

The next step was to cut the bottoms and backs out of 1/2” plywood. The backs for the large and small bins are the same size, the bottoms are (of course) larger on the larger bins.

The fronts were cut from 3/4” pine, again the larger bins had larger (taller) fronts.

Next a rabbet was cut on the sides of the fronts. This would accept the hardboard sides, so was the width of the hardboard. Another rabbet was cut on the bottom of the front to accept the bottom 1/2” plywood.
A dovetail bit was used to make a slot for holding a label, on the fronts of each bin. (The L shaped piece of wood, below, is just a jig to help push the front pieces through the router)

This is what I ended up with for the fronts

All pieces were sanded and then it was time for assembly. The back plywood sits on top of the bottom piece, the front sits with the rabbet over the bottom plywood. Then the side goes on over that. I used glue as well as small nails to assemble these.

I had 31 of these to assemble, which took much longer than I thought it would. Please remind me in the future not to make 31 of anything.

Each rail is screwed into the wall at the joists, with 4 5/8” between them, this is important because the bins actually sit on the rail below and hook into the rail above.

I had them at my previous shop and removed the rails and boxed up the bins when we moved over a year ago.

Here they are in my new shop 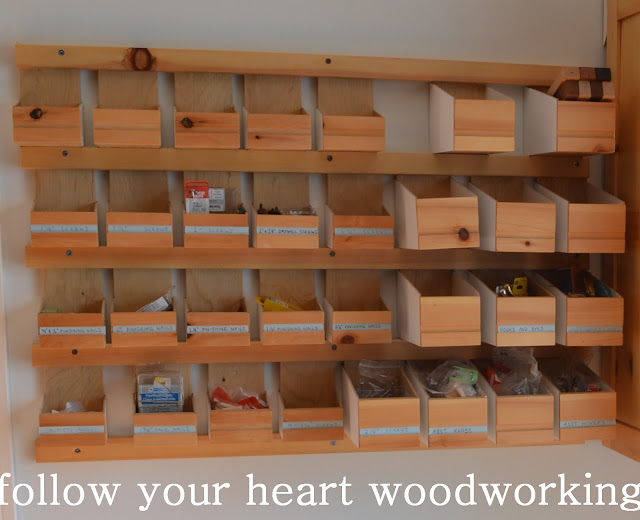 I'll show more photos of the rest of my tools in their new homes in my next blog post.

I was featured for this post at DIY Vintage Chic!